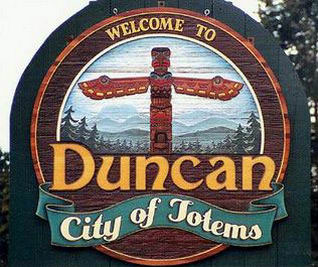 Duncan is a city on the southern part of Vancouver Island, located in between Nanaimo to the north and Victoria to the South.  Named after William Chalmers Duncan who was born in 1836 in Sarnia, Ontario.  In the early 1900s, Duncan's Chinatown was the social center for the Cowichan Valley's Chinese population.

The city of Duncan has a total of 80 totem poles around the entire town, which were erected in the 1980s.  Duncan has a large First Nations community and is the traditional home of the Cowichan Tribes.

Latest listings in Duncan, BC

$385,000
923042 MLS® #
Welcome to the Kingsview Phase 3 in beautiful Maple Bay. This new subdivision has underground services, street lighting, sidewalks, lots of greenspace, parks, trails and has views over the valley, mountains and Quamichan Lake. Lot 28 is a fully serviced and engineered 463.0 m2 (0.11 acre) – easy to build on lot - ready for your custom home. Comprehensive building scheme and design guidelines are in place to ensure a cohesive community. Price plus GST. Come and experience living in the beautiful Cowichan Valley. This is a lot sale - Builder/seller is available to start immediately on a custom home - cost plus 10% – you bring a plan or builder can work with you to design your dream home.

$679,000
3 Beds ⋅ 3 Baths ⋅ 923014 MLS® #
Here's a rare opportunity to buy a main level entry patio home with a full walk out basement and a 2 car garage! This prime end unit with a totally private front courtyard patio & back yard backing onto nature in incredible. Main level features a spacious living room with an efficient gas fireplace, huge open island kitchen with adjoining eating areas, laundry facilities & 2 bedrooms (the master features a walk-in closet & a 3 piece ensuite with a sit down shower). Lower level walk out basement features 23x20 rec room with access to back yard, a spare bedroom, a 3 piece bathroom, an office, & plenty of storage. This home has been beautifully maintained & the pride of ownership shows! The Meadows is a sought after 55+ community, centrally located on a quiet dead end street, close to all amenities. Enjoy the convenience of the patio home lifestyle without compromising on space!

$359,000
922730 MLS® #
Great lot surrounded by greenspace with GST already paid! This lot is ready for a two-storey home and legal suite potential. Located in the heart of Maple Bay, Kingsview is ten minutes to the beach or downtown. Situated on the slope of Mt Tzouhalem, views of Quamichan Lake, Mt Prevost and Maple Mountain. This area includes parks, trails, and open spaces. Comprehensive building scheme and design guidelines are in place to ensure a cohesive community. Infrastructure includes sidewalks, traffic calming, and attractive street lighting. This lot can legally accommodate a suite and is fully serviced and prepared for easy building.

$149,000
2 Beds ⋅ 1 Baths ⋅ 922842 MLS® #
Welcome Pad #72 in Evergreen Place Manufactured Home Park. This well managed park is 55+, pets allowed with park approval, on a bus route and close to town for all of your amenities. Pad rental is $490/month. Quick possession possible. This single wide unit offers 790sqft with 2 bedrooms and one bathroom. There is an open plan living and eat in kitchen, 4 piece bathroom, washer & dryer and the two bedrooms. There is large covered deck at the entrance, plus a covered deck back entrance. Tenancy subject to Park Manager approval. This Mobile Home Park has a home improvement policy requiring improvements to this home (upgrades to windows and siding, and general sprucing up of the skirting and deck paint) that must be completed by the purchaser within one year of the purchase date - Price reflected. Come and experience living in the beautiful Cowichan Valley.

$335,000
922844 MLS® #
9252 sq ft lot with mountain and potential ocean views (especially on an upper floor) in Cowichan Bay Estates Phase 3. Lot 12 which is in front of the subject property, is to be limited to a single story through the Building Scheme (the developer will only be approving a single story home for Lot 12). Cowichan Bay Estates Phase 3 features 48 beautiful new lots with various ocean, estuary, & spectacular mountain views in the quaint seaside village of Cowichan Bay. Within walking distance to marinas, trails, parks, recreation, shopping, restaurants and more. An easy commute to Duncan, Mill Bay & Victoria. Full underground services including sewer, water, & natural gas. Both modern and traditional house designs welcome. Zoning allows for suite or accessory dwelling. A perfect opportunity to enjoy the Cowichan lifestyle on world famous Vancouver Island. Price is plus gst. Click on the multimedia links for more information.

$725,000
2 Beds ⋅ 2 Baths ⋅ 922864 MLS® #
RANCHER in a desirable location perfect for small families, single individuals, or retirees. Tucked away in a quiet neighborhood, this single-level home features a double garage, 2 bed+den with brand new high-quality waterproof laminate flooring throughout the main living space, newer kitchen appliances, and a washer/dryer. The main living space consists of a great room boasting 10’ ceilings with a gas fireplace, large picture windows bringing in lots of natural light, kitchen and bar, dining room, and living room with access to the backyard. The master bedroom is very spacious with a walk-in closet + access to crawl space, and ensuite. A sliding door leads to your private, fenced, and irrigated backyard with a patio area, shed, and garden beds. Close proximity to schools, hospital, the town of Duncan, Trans Canada Trail, and all amenities.

$390,000
922822 MLS® #
Located in the heart of Maple Bay, Kingsview is ten minutes to the beach or downtown. Situated on the slope of Mt Tzouhalem, views of Quamichan Lake, Mt Prevost and Maple Mountain. This lot is ready for a main level entry home with walkout basement. This area includes parks, trails, and open spaces. Comprehensive building scheme and design guidelines are in place to ensure a cohesive community. Infrastructure includes sidewalks, traffic calming, and attractive street lighting. This lot is fully serviced and prepared for easy building. Price plus GST.

Listing content Copyright 2023 Vancouver Island Real Estate Board. The above information is from sources deemed reliable, but should not be relied upon without independent verification.