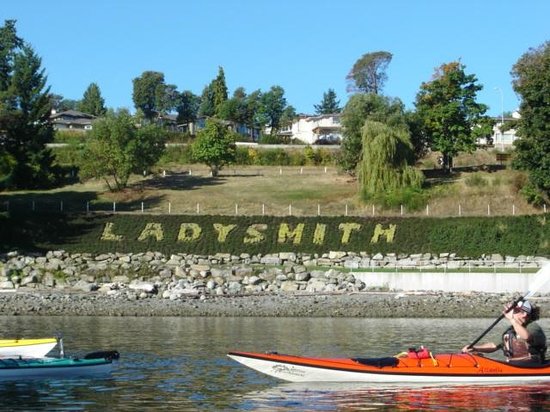 "Heritage by the Sea" - Ladysmith is a town located on the 49th parallel north, on the east coast of Vancouver Island just south of Nanaimo.  Located within the Cowichan Valley Regional District, Ladysmith has a population of 8,537 based on the 2016 Canada census.  In 2017 Ladysmith's historic First Ave was named the best street in Canada by the Canadian Institute of Planners.  Each year during the Christmas holidays, this same street is lit up and decorated with Christmas decoration, making it a very popular street for site seekers looking to take part in the festivity.

Ladysmith was founded in 1898 by James Dunsmuir, a year after he built shipping wharves for loading coal at Oyster Harbour, now known as Ladysmith Harbour.  Ladysmith was renamed by Dunsmuir in 1900 in honor of the British lifting the siege of Ladysmith in South Africa during the Second Boer War.  The Town of Ladysmith was then incorporated on June 3, 1904.

Latest listings in Ladysmith, BC

$515,000
2 Beds ⋅ 2 Baths ⋅ 920006 MLS® #
If you’re tired of shoveling the snow in your own driveway, here is your opportunity to live where that is taken care of for you! Centrally located within flat walking distance to downtown Ladysmith and just a short drive to Duncan or Nanaimo, this lovely Belwood Village 2 bed, 2 bath patio home offers a stylish and low maintenance lifestyle! This 956sqft home has some nice extras with vaulted ceilings, bamboo hardwood, skylights and a butcher block island to gather around in the kitchen. Watch the game on your wall mounted TV with built in surround sound and have your friends and family stay in the spare bedroom with built in queen size murphy bed. Enjoy your private patio, garage with workshop space, heated crawl space for extra storage, and neat and tidy green space. This 50 plus strata offers a small and quiet community with low strata fees and pets are allowed. All measurements approx. Pls verify if important. Don’t delay and check out this home today!

$599,900
2 Beds ⋅ 2 Baths ⋅ 919825 MLS® #
Welcome to 871 Cameron Way! This well maintained 2 bed 2 bath move in ready rancher is situated in a quiet, friendly neighbourhood and is within walking distance to all Ladysmith schools, Holland Creek trail system and Frank Jameson Rec center. The home has an open floor plan with lots of natural light, large double garage, wide hallways and a sliding door off the kitchen that leads to the relaxing deck. The low maintenance back yard is fully fenced for your four-legged friends. This home is perfect for the first-time buyer or anyone wanting to downsize. Come check it out!

$569,000
919788 MLS® #
Here it is - a golden opportunity and a great choice: build your dream home on 1.08 pretty acres, with the possibility of future development potential (near the ocean, recreation, and shopping) that sit on a no-through private road with Ladysmith Harbour and the Coastal mountains grandstanding before you. There is already a workshop built on the property. Septic and water are available for this ideal lot. Gardens and fruit trees ... swimming pool or tennis court ... or just another lovely, green, restorative space for you and the birds to revel in. Call soon to tour this property and discover exactly why this is a remarkable place to live.

$247,000
2 Beds ⋅ 2 Baths ⋅ 918748 MLS® #
This unit sits on an extra large lot with ample room for your RV and the separate two room office/workshop. The park has close amenities -airport, pub, grocery store , hairdresser and golf course. You can watch your garden grow from the large covered deck. The 55+ rule does not restrict the friendly neighbourhood atmosphere. Pets are allowed with management park approval.

$1,199,900
3 Beds ⋅ 3 Baths ⋅ 919602 MLS® #
Perched on a hill in historic Ladysmith boasting breathtaking ocean and Coastal Mountain views are 'The Gales'. This luxurious townhome offers fine craftsmanship and a contemporary design spread out over a spacious 2796 square feet. First featured as the original show home in the development, this unit has been packed full of additional upgrades including designer tiles, crown molding, heated tile floors, custom blinds, an efficient natural gas furnace, heat pump and architectural window films installed for UV and IR filtering. Gorgeous Brazilian oak hardwood floors, solid granite counters, over height ceilings and oversized picture windows showcasing the stunning views and creating a bright and light filled space. This floorplan is fantastic with everything you need on the main level coupled with the 4th bedroom, massive rec room, 4 pc bathroom and large laundry & storage area on the lower level. All information should be verified if fundamental to purchase

$865,000
3 Beds ⋅ 3 Baths ⋅ 919598 MLS® #
Situated on a quiet a cul-de-sac, backing onto a green space, you will find this 2-story energy efficient Near Zero built home. A 12 KW solar array sits atop the south-east side of the roof, to take full advantage of massive energy savings. From the moment you enter the home you’ll feel the quality craftsmanship & attention to detail. The main floor features 9’ ceilings and a versatile layout. The main living space is bright & cheery, w/ lg windows highlighting the beautiful setting & the fully fenced rear yard. The upper floor enjoys the laundry room & all 3 bdrms incl. the primarily suite. Some of the modern efficiencies throughout the home include quartz counters in all areas, a heat pump hot water tank, high efficiency natural gas furnace, luxury vinyl plank flooring, solid wood cabinetry & the garage is wired for an EV Charger. The home is heat pump ready which can be used for heating & cooling year-round, reduce the cost to operate the home & shrink your carbon footprint.

$624,900
2 Beds ⋅ 2 Baths ⋅ 919601 MLS® #
BREATHTAKING OCEAN VIEWS. Where fantastic value meets luxury living. Upon arriving you will be welcomed by the carefully curated front garden and spacious front deck. This 2 bed, 2 bath rancher offers an expansive and bright layout. Recent updates included a revitalized gourmet kitchen, luxurious main bath and ensuite as well as high quality vinyl plank through the main living areas and bedrooms. With ample windows looking out over your stunning views you will enjoy the natural light - not to mention the amazing sunrises to which you'll have a front row seat. This home offers over 1300 sqft of living space, all on one floor, with sliding glass doors off both the kitchen and primary bedroom that open to your spacious patio and manicured yard. Gas Furnace and AC will keep you comfortable year round! The nearly 8000sqft lot (per BCA) also offers an abundant parking, even for your RV, in addition to the over-height 2 car garage. Details and measurements are approx and should be verified.

Listing content Copyright 2022 Vancouver Island Real Estate Board. The above information is from sources deemed reliable, but should not be relied upon without independent verification.