The Harbour City - Nanaimo, BC 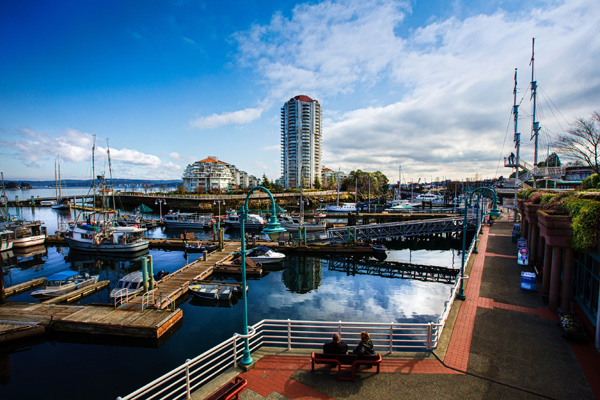 Known as the "The Harbour City", Nanaimo is now a quickly growing city due to the housing market in Vancouver and Victoria becoming unreachable to a lot of home buyers.  Nanaimo is located on the east coast of Vancouver Island, which is separated by the Strait of Georgia.  Previously known as the Hub City, Nanaimo is connected to Victoria to the south by 110 km, Campbell River, Comox Valley, Parksville, Qualicum Beach, and Nanoose to the north.

Vancouver Island is linked to Vancouver via the BC Ferries terminal in Horseshoe Bay at West Vancouver, and Departure Bay in Nanaimo, which is a 1 hour and 40-minute sailing across the beautiful Strait of Georgia.  In 2017 a total of 3,381,076 passengers used the ferry to travel from Horseshoe Bay, and Departure Bay, with the peak season, is obviously in the summer months when everyone is vacationing on and off Vancouver Island.

$869,900
3 Beds ⋅ 2 Baths ⋅ 922729 MLS® #
Set in a park-like location, this 1735sf rancher is nestled onto a quiet cul-de-sac only a stone's throw from Sealand Park and trails to beach. A truly walkable neighbourhood close to schools, more parks/beach accesses. The home boasts 3 bedrooms including a 16'x11' primary bedroom with full ensuite and walk-in closet. The island kitchen adjoins a large eating nook and family room; the nook has a built-in buffet and door to the private patio and mature yard; the family room is spacious, ideal for a media center. The family room shares a 2 sided gas FP with the sunken living room and dining area. You have a great room off the kitchen on one side and a traditional plan with dining and living rooms on the other. The living room is bright with morning sun through the bay window. A laundry room with sink opens into a 23'5"x19' garage. Built-in vacuum, newer roof, in-ground sprinklers, gas HWT and updated gas furnace. All measurements are approximate and should be verified if important.

Courtesy of RE/MAX of Nanaimo

$158,900
2 Beds ⋅ 1 Baths ⋅ 922988 MLS® #
Welcome to this affordable, move-in ready home in Brookdale MHP. This 2 bedroom, 1 bathroom benefits from newer luxury vinyl flooring, newer furnace, some newer paint, updated bathroom and the roof is believed to be approx 10 years old. Outside there is a large deck, part of which is covered so great for year round use, plus storage shed and a good sized garden area. This park is close to Southgate Shopping Mall so easy access to a grocery store, coffee shops, drug store, restaurant, gas station and transit, It is a 55+ park and allows 2 small pets. All measurements are approximate and should be verified if important.

$449,900
1 Beds ⋅ 1 Baths ⋅ 923083 MLS® #
Best priced condo in PACIFICA, downtown Nanaimo's premium oceanfront condo building. This rare oversized 1 bedroom 1 bath has a massive 915 sq ft of luxury living. The unit is 23% larger than the regular 1 bedroom units in the building. Floor to ceiling windows allows for an abundance of natural sunlight and views of the historic courthouse and Mt Benson. Chef's kitchen with granite counters and Jenair commercial fridge and gas stove. Gas fireplace and gas outlet on the covered balcony as well make use of of fact that gas is included with your strata fees. In unit washer/dryer, steps to the shops of downtown but yet secure being off the ground level gives you both security and capacity for quick exits via stairs if need to as is a manageable two flights down to street level.

$575,000
2 Beds ⋅ 2 Baths ⋅ 920668 MLS® #
Here is your chance to own a beautiful new TOP FLOOR condo with amazing mountain views! With 2 bedrooms, and 2 bathrooms this is one of the premier floor plans with walk in closets in each bedroom. Upon entering this home, you'll be pleasantly surprised with the warm colour scheme, quartz countertops, luxury vinyl plank flooring, spacious laundry room and most notably, the large covered private deck with stunning mountain views: if you enjoy privacy with sunset views, this deck is the one for you. The unit comes with 2 parking stalls and the complex allows pets (no size restrictions), rentals and offers an amenity room and gym. Enjoy the experience of a brand new complex within walking distance to trendy coffee shops, grocery stores and the lake. All data and msmts approx.

Courtesy of RE/MAX of Nanaimo

$569,900
922897 MLS® #
Ready to build lot available in the most desirable neighborhood of North Nanaimo. You'll enjoy the most amazing panoramic ocean views across the Georgia Strait or over the Winchelsea Islands. Conveniently located in Nanaimo's North end above Laguna Way and adjacent to Lost Lake Park. A comprehensive building scheme is in place to ensure high quality residences to protect your investment. The lot would suit a main level entry home or a hillside walk-up - drive by and take a look - you will surely be impressed. Ocean crest - the perfect place to call home. Build your dream home here! All data including measurements are from sources which we believe to be reliable but should be verified if deemed to be important.

$660,000
3 Beds ⋅ 2 Baths ⋅ 922941 MLS® #
Beautifully updated home in Long Lake Heights. This 3 bedroom, 2 bathroom home offers a private feel, nestled in a natural haven. The main living area looks towards the lake. Off the kitchen the glass French doors open to a large patio area. The space lends itself well to entertaining and patio living. Inside, the open floor plan features a cozy sunken living room with fireplace, treetop vistas views & a light-filled kitchen. The master suite has a fully updated ensuite and a large walk-in closet. The main washroom & two other bedrooms are also on the upper floor. To the side of the home is access to a workshop, perfect for hobbies and storage. Ideally located in Long Lake Heights Estates with multiple lake access points nearby, swimming, boating, and fishing all right at your fingertips, as well as the many amenities of Nanaimo’s North End. Just a short walk to the lake and park access trails that this strata subdivision provides.

$574,900
5 Beds ⋅ 3 Baths ⋅ 923047 MLS® #
Located in Old City Quarter, walking distance from amenities & transportation, 5 minutes from VIU, this 5-bedroom home with a 2-bedroom suite. As you enter on the lower level the suite has a woodstove & an open concept living/dining/kitchen combo w/tons of storage, two large bedrooms, 4-piece bathroom & shared laundry. Upstairs on the main floor there is another woodstove w/an open living room w/eating nook which could also be used as a home office space. Flowing through into the kitchen you have a eat up bar with spacious dining room and tons of natural light leading to your large deck out back. The primary bedroom has plenty of space for a king size bed & all your furniture, as well as a 2-piece ensuite. The other two bedrooms & the 4-piece bathroom in the hall round out this level. Bring your ideas for the front and backyards as they’re a blank canvas including covered workshop area. Property zoned R14 multifamily & has lane access in back. Msmts approx, verify if import.

$719,900
4 Beds ⋅ 2 Baths ⋅ 923039 MLS® #
Investor Alert! Welcome to this solidly built home in Central Nanaimo. The property boasts a large .22 acre lot that has a fully fenced backyard perfect for your furry friends, kids and private backyard barbeques! This 2468 sqft home has a large open concept upstairs living space with a fireplace, laminate floors throughout, 2 generous sized bedrooms and a 4 pc bathroom. Off the Primary Bedroom is access to a massive 23' x 18' deck and likewise off the Mudroom there is the access to another 14' x 11' covered deck to relax on no matter what the season! Downstairs there is a 2 bedroom suite with a 4 pc bathroom, kitchen, fireplace, shared laundry and separate entrance. The home also features more than ample parking as well as a spot for an RV. This property is walking distance to numerous amenities, parks, recreation, elementary school and bus routes. Whether as an investor or looking for a solid family home, this property ticks all the boxes. Book your showing today!

Listing content Copyright 2023 Vancouver Island Real Estate Board. The above information is from sources deemed reliable, but should not be relied upon without independent verification.